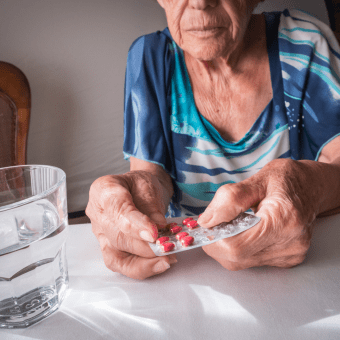 Fatima is a 78-year-old lady who happens to be a retired head nurse of the local hospital. She is very well put together and vivacious when seen in the Primary Care Memory Clinic.  But it's clear that she has some difficulties with memory. And her husband Mo, who accompanies Fatima to the appointment, reports that this has been happening in a slow and gradual way over the last couple of years.


In the last six months, Mo has had to take over the banking and now needs to supervise many of the everyday recipes that used to come so easy to her. Fatima takes Metformin for her Type 2 Diabetes, Sertraline for mood and anxiety and Ramipril for high blood pressure, but she’s otherwise healthy and goes swimming twice a week at the YMCA. At the clinic, Fatima participates in cognitive screening with the Montreal Cognitive Assessment or MoCA, and her score is below what was what would be normal (she scored 20 out of 30 with zero out of five on a short-term recall list of words. A normal score is 26 or higher). The physical exam is unremarkable and labs, including a CT scan of the brain, was unremarkable.


Fatima is given a diagnosis of dementia or major neurocognitive disorder. The most likely cause is Alzheimer's disease. Fatima and her family are referred to the Alzheimer society and advised to continue with her blood pressure medications and exercise program. But they have a lot of questions about medications that could help with the dementia.

In this article we'll talk about the cognitive enhancers that we currently use for dementia, what you could expect when started on these medications, and when they should be stopped.


Some facts about cholinesterase inhibitors:


What are the Cognitive Enhancers?

The medications that we use most often fall into two categories: cholinesterase inhibitors and NMDA antagonists. Let's look at these medications.

What they’re used for:

Who can’t take it:

What to expect: *For my more scientific review of the data behind the cognitive enhancers, check out this article and video*


When to Consider Stopping:

It’s reasonable to consider stopping a cholinesterase inhibitor after trying it for at least one year, in the following situations:


Many patients and families ask me about stopping the medication when a person with dementia is admitted into a long-term care home.  It used to be fairly common practice for us to stop these medications at the time that a person was transitioning into long-term care, but more recently, my practice is to continue, as long as none of the above conditions are met.  In fact, there’s some evidence that stopping the cholinesterase inhibitor when a person with dementia in long-term care  is having symptoms of hallucinations or delusions may make those symptoms worse.

Stopping a medication that was often started with great hope that it would keep a person well for as long as possible is difficult.  I usually remind families that the treatment od dementia doesn’t just involve pills, but also exercise, diet, socializing, maintaining a routine and a comfortable environment are just as vital as mediation, if not more.

What it's used for:

Alzheimer's, Dementia with Lewy bodies, Parkinson's related dementia and some other dementia types.   It can be used on its own if a person can't take a cholinesterase inhibitor, or can be taken in addition to one.

Who can’t take it:

Those with an allergy to the medication. We use caution in those with a history of seizures, or an unreliable medication delivery system

What to expect:  *For my more scientific review of the data behind the cognitive enhancers, check out this article and video*

When to Consider Stopping:

To learn more about Dementia, check out these articles:

VIDEO: Mild Cognitive Impairment - What is it and What You Can Do About it.

Here are some of the scientific studies I mentioned in the article: