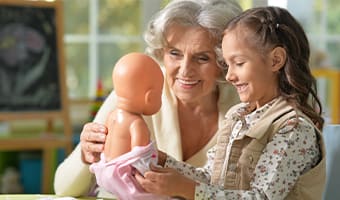 Doll therapy involves giving a realistic baby doll to a person living with dementia, sometimes along with accessories and clothing.

Studies of the effectiveness of doll therapy have demonstrated that the therapy can produce an increase in well being , a reduction in anxiety, and in some cases, less need for psychoactive medications.  Proponents also point out that doll therapy does not have the hazardous side effects that can go along with some medications, and that it is low cost.

I will never forget a home visit that I did with a nurse practitioner, to a family whose matriarch, Mabel, had been living with dementia for 8 years.  She was unsteady on her feet, had difficulty feeding herself and using the toilet without step by step cuing, and she was in almost constant distress. She appeared fearful, lost, and sad.  Numerous medications had been tried, some with sedating and fall inducing side effects, some with no obvious effect.  As Mabel’s  situation became more difficult, we decided to try a therapy that is considered by some to be “babyish” and demeaning: doll therapy. We provided Mabel with a lifelike  toy baby doll, and within hours, she was calm, talking to her “baby” in gentle coos, and smiling.  It was almost miraculous.

Julie Wheeler, Administrator Long-Term Care at Sunnyside Home, a long term care residence and home to over 250 seniors, most of whom are living with dementia, told us that the idea to use doll therapy in the home was one that provoked a lot of discussion with staff and families. Overall, it has been a positive addition to the many interventions that Sunnyside uses to make the building seem more like a familiar home.

“We had a few surprises, for example that some people who had never been parents were very interested in the dolls, whereas some who had raised several kids didn’t seem to connect with them.”  Wheeler also reports that there have been residents who have engaged very quickly with the dolls and have subsequently been more engaged in other interactions with staff, co-residents and family members.  “Some residents use the dolls as dolls, recognizing that they are not alive, but enjoying them as a source of recreation; others seem to interact with the dolls as though they were real.”

The complexity of the changing brain in dementia makes it difficult to find an effective combination of pharmacological and non-pharmacological  interventions to help with the symptoms and responses to environmental and emotional stress. Doll therapy can look unusual and age-inappropriate unless we consider it as one tool of many to create a comforting and manageable setting for someone who is navigating the waters of  major neurocognitive disorder.

The Wrinkle Can Help

Contact us if you are interested in learning more about doll therapy and if it is right for your loved one living with dementia.